Fizzie is the corporate mascot of Fizzco, and a boss in Sunset Overdrive. He is often featured as a large advertisement balloon floating above Sunset City.

Fizzie talks enthusiastically like a typical family-friendly marketing mascot, with a voice that was focus-tested to appeal to infants "and males in their 20's". He was programmed to dislike anyone who doesn't drink OverCharge, and becomes incredibly hostile towards those who trespass on or damage Fizzco property. He always spews profanity.

Fizzie balloons can be found throughout the city and act as a collectable to create amps.

Fizzie can be heard as the Player climbs up the apartments advertising Overcharge and commenting on the Player's progress.

It's Me! Fizzie! Edit

Fizzie is heard through the radio transmissions that make it unable to find Bryllcream. He appears after the transmitters are destroyed, toppling part of the tower and attacks the Player for trespassing on and destroying Fizzco property.

Fizzie will first shoot at you with sweeping eye lasers, and eventually bring out explosive balloons and lock-on rockets. His lasers will be focused on the grind cable, so jump off to avoid them. The balloons will eventually settle along the cables, so shoot them if they are in your way. Rockets can be dodged by dashing. When the satellites power up, jump on three of them to stun Fizzie and then unload your weapon of choice into his eyes when they turn green (you have unlimited ammo for this fight). Repeat this until his face is burnt off, exposing a disco ball (you can continue to stun him, but is not necessary to cause further damage), shoot this weakpoint to finish him off.

Fizzie: The Inside Story Edit

While searching around the destroyed radio tower, the player finds one of Fizzie's AI core and reports it to Sam. Sam becomes curious to know what's inside Fizzie's memory and asks the player to take it to a Fizzie Fortune-Telling Machine where he can gain access to Fizzco's secrets. As Sam tries to access data, he inadvertently reactivates Fizzie and gets locked out.

When Sam starts messing more of Fizzie's coding, he accidentally activates the empathy chip and altered Fizzie's morals, causing him to become guilty for all the people he turned into monsters and cries tears of OverCharge Delirium XT (much to the player's disbelief). Sam gets locked out once more and asks the player to take Fizzie to another machine. Arriving on the next machine, Fizzie becomes very guilty for killing the innocent children and activates his self-destruct mode, where he intends to kill himself and the player with him.

Sam tries to stop it, but gets locked out. So the player rushes the core to another fortune machine and Sam was able to stop it in time. Upon accessing more of Fizzie's coding and memory banks, Sam becomes shocked how Fizzie was created: He was created by Fizzco robots from a "Focus Group." A random Fizzco Robot appears and explains that robots are the only things that could make a fun enough mascot. The Focus Group, attacks but the Player demoralizes them by reducing their "ratings" to half a stars.

Fizzie came to his senses that he was selling Overcharge, that turned people into monsters. Feeling guilty for all the innocent people, Fizzie begs the player to throw him into a nearby body of water to drown himself. Sam, out of reluctance, had no objections to this. So the player throws Fizzie into a nearby water. As he briefly floats, he thanks the player for helping him realize. Then Fizzie sinks below water and drowns.

Fizzie appears in the final half of this story mission, where the Player (after drinking an entire bottle of Fizzotussin brand pharmaceuticals) hallucinates chasing a flying, talking Fizzie plushie around the city, while avoiding lava and Fizzie's "friends" (OD skeletons). The sequence ends on top of the Fargarthian castle, where Fizzie leaves the Player a Dirty Harry pistol, and then proceeds to multiply and attack the Player with rockets until the original is shot.

Fizzie appears as the final boss after the fake end credits. A copy of his A.I. takes control of the Fizzco HQ building and attempts to destroy the city.

This part is on a timer, so don't delay. Fizzie's main defense is electrifying the grind rails that lead to the top of The Building (the ones on his arms will travel along the lines, and one of the three rings at the top will gradually electrify if the Player stays on one too long), and there will be a few enemies in your way, do not worry about them. There are also orbital laser strike, but are pretty easy to predict and evade. Use the environment to traverse your way to the top of The Building and shoot the exposed power core (Hair Spray Bomb, TNTeddy or Pro Pain works best) until Fizzie breaks off and advances to the next district. This will create a new timer, so if you take too long doing one section, you don't have to worry about not having enough time to finish the fight. After a total of three passes at the power core, The Building will be destroyed and the city is saved.

Fizzie makes a few appearances in online multiplayer. Fizzie Attacks! in the Harbor District is similar to his It's Me! Fizzie! boss fight, and in the Downtown District, The Floor Is Lava tasks players with collecting Fizzie plushies while avoiding falling in the lava. Fizzie Attacks... Again! in the Robot Factory is similar to Fizzie Attacks!, but with randomized Satellites.

Appearances In Other Media Edit 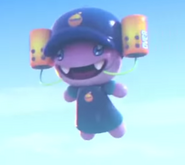 Concept art of the inflatable Fizzie

Real life promotional Fizzie plushie.
Add a photo to this gallery
Retrieved from "https://sunsetoverdrive.fandom.com/wiki/Fizzie?oldid=7536"
Community content is available under CC-BY-SA unless otherwise noted.